The world famous artist moved to Berlin in 1976

Everyone can fall in love with Berlin as David Bowie did. Read about the social hotspots that inspired the english singer to compose his Berlin - trilogy. Willing to walk away from his drug addictions, the English and innovative song writer David Bowie decided to move to Berlin (1976-1979) and rented an apartment located at the Hauptstraße 155 falling in love with the City. Finding the building is not difficult since the house has a plate to commemorate the singer's Berlin era.

The called 'living room of bohemian Berlin' opened in the early 60s and was a meeting spot for celebrities during the 70s, 80s and 90s after being sold to Michel Würthle. The interview 'Bad Boys in Berlin' with Iggy Pop and David Bowie took place in this venue. When you visit the restaurant, you basically travel in time. The walls are largely decorated with pieces of art including a portrait of David Bowie. This restaurant is located on the Kanstraße 152. Hop Off at our stop 12, Kurfürstendamm to visit it.

The queer café 'Anders Ufer' (En: Another Coast) was founded by Gerhard Hoffmann and Reinhard von der Marwitz. The name and the bold concept of the café made their mark. This exciting and open café was a meeting point not only for queer audiences but also for anyone who wants to have a coffee or a beer. Nowadays, it is called Neues Ufer (En: New Coast).

From the late 1970s to the mid-1990s the 'Dschungel' was located at Nürnberger Straße. The stylish and exclusive techno music disco had no free admission, because not everyone was allowed to enter the club. It is interesting that Mick Jagger, Prince and even Sylvester Stallone were also guests of the club. Hop Off at our stop 12, Kurfürstendamm.

U2, Depeche Mode, Nina Hagen recorded here, in the Meistersaal Hansa Tonstudio - Kreuzberg at Köthener Straße 38. The inspiring acoustics were greatly appreciated by U2, ZZ Top and other musicians after David Bowie produced his famous albums 'Heroes', 'Low' and 'Lodger' known as the 'Berlin Trilogy'. 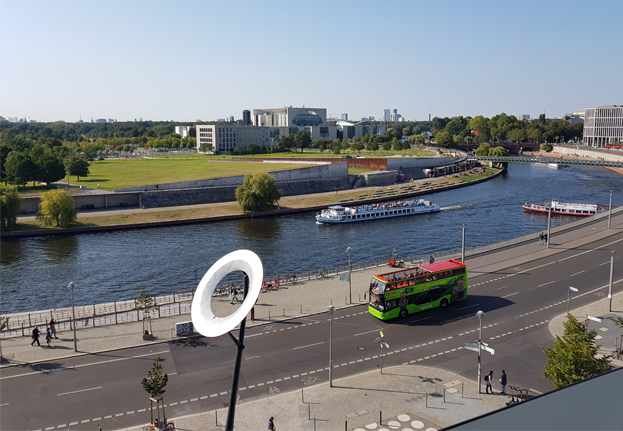