Sightseeing tips and how to find the bus

It is common to come to the german capital aiming to discover the beauty of East Berlin. On the other hand, did you know that the area close to Charlottenburg was quite interesting in her own way? We have three reasons for you to visit this district when doing Stromma Hop On – Hop Off bus tour. With our GPS Live map, you will not miss the next bus.

Here you find tips for your next trip to this interesting district in Berlin. Just let us inspire you!

What made Charlottenburg so interesting?

Inittially, was Charlottenburg an independant city until the 1920s when it became part of the Berlin city. During the so called Golden 20s, the city became one of the most visited cities around the world thanks to breakthroughs achieved in art, science, film, architecture and more. Berlin was a goal for many national and international artists such as the writer Christopher Isherwood who moved to the city in late 1920s and immortalised his love for the city in his novel Goodbye to Berlin.

The landscape is differently shaped as other districts. On one side, you have wider streets designed for vehicles and buses such as the Kürfüstendamm, a boulevard where you find luxury shops like Chanel and Giorgio Armani. On the other side, buildings were rather smaller, costly looking and usually for one family in comparison with other areas in Berlin as Alexanderplatz where you find buildings for several families having even 20 stories.

The top landmarks in West-Berlin

One of the best known is KaDeWe, which is an acronym for Kaufhaus des Westens (German for Department Store of the West). Between 1960s and late 1980s, KaDeWe was the store where politicians  and the wealthy society would purchase their luxurious commodities. Hop Off at our stop 13 to see this still opulent store.

Another interesting building along our Hop On – Hop Off sightseeing tour is the Charlottenburg Gate located on one end of the Tiergarten. On the opposite end of the park, you find the Brandenburg gate. This astonishing structure welcomes you to the district Charlottenburg when you are coming through the Big Door. The gate and the bridge where built in the first decade of the 19 hundreds in a neo-baroque style and includes bronze statues of King Frederick I of Prussia and his consort Sophia Charlotte of Hannover. We do a break at Mercedes Benz, from where you can enjoy a 5-minute walk to this amazing gate. Our tip: On Saturdays, there is a fleahmarket at the Charlottenburg Gate!

The Kaiser-Whilhelm Memorial Church is one of the most interesting landmarks in Charlottenburg since it has not been significantly restored from the damages suffered during an air raid in 1943. Initially, the church had five towers and occupied an area four times bigger than it currently does. Besides that, the tower you see nowadays is 70 meters high, but it used to be over 110 meters high including the cross.

Check when the next bus is coming

When taking Stromma´s Hop On – Hop Off sightsseing bus, you can Hop Off the bus and just visit the landmarks we mentioned at your own pace. After that, just get back to the bus stop to take the coming bus. Open our GPS live map and see when the next bus is coming! 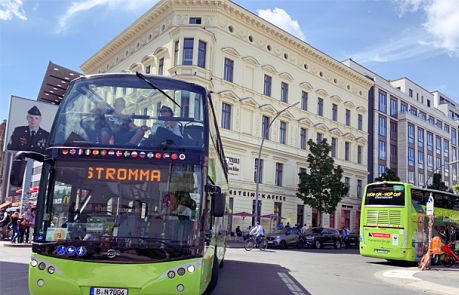 Take a Hop On - Hop Off sightseeing Tour!

Discover the city with the best double-decker buses!

Book online the Hop On - Hop Off Bus Tour and enjoy a great ride from Stromma´s double-decker buses as you learn about Berlin with our Audioguide in 16 different languages! 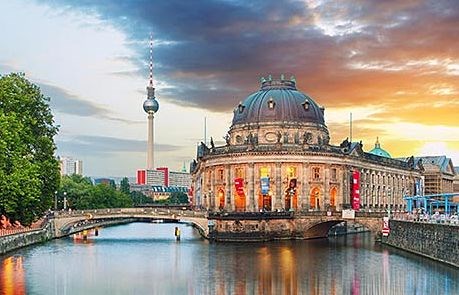 Wondering what else you can do in Berlin?

Then read our article what to see and do in Berlin! You will find the best tips about the city landmarks you should know and events you should attend in your next visit to the city!