A WWF collaboration to create mofe life in the harbor

On September 9th, 2021, Stromma celebrated the launch of 20 Biohuts in the Copenhagen Harbor. Biohuts are underwater fish hotels for small fish and fry to hide from big fish, live and eat. The sheltering function of the Biohuts will increase the survival rate of the fish and increase the population. The Biohuts are a part of the collaboration between WWF and Stromma.

Biohuts are steel cages that provide shelter for small and vulnerable fish. They don’t trap the small fish, but they keep the big fish out. The Biohuts works as a pantry, a canteen, and a safe haven for small fish in their vulnerable stage of their life cycle.
In built environments such as the Copenhagen harbour, you often see the vertical sheet pile wall, which lacks the complexity and depth that is otherwise the basis for life to flourish. When you install Biohuts, you create what experts’ term biological niches, which can become hotspots for life. By providing a safe space for small fish to live and grow the Biohuts contribute to an increased population, a better harbor environment and increased biodiversity.

The Biohut – how it works

A Biohut consists of a steel cage with a chamber filled with clean, empty oysters which have a complex exterior on which algae and small organisms, that fish feed on, can grow. The exterior steel cage protects the young fish with a size of up to 3 centimeters against larger predators, while the inner chamber provides the fish with food. The Biohuts are installed approx. 20-50 centimetres below the surface of the water in locations where no one swims and where they won’t get in contact with boats etc. 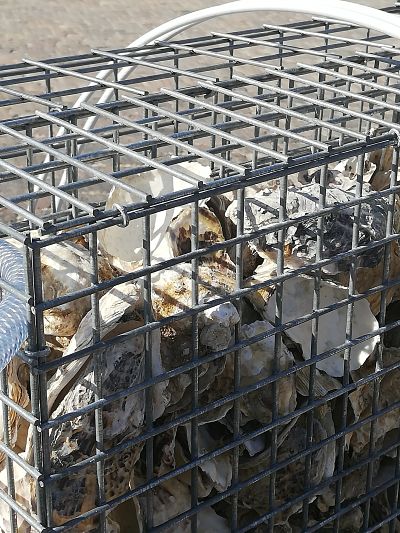 Biohut-projects are found in several locations in the world, particularly in the Mediterranean. In Denmark, Biohuts can also be found in Aarhus, Helsingør, Grenaa. Including the 20 new Biohuts from Stromma, Copenhagen Habor has 70 Biohuts in total. This makes Copenhagen the place in the world where most Biohuts are installed. From experience, we know that the fish move into the Biohuts straight away and as a result, one can expect a fast impact in the shape of increased biodiversity and in time also more fish. An increased fish stock can as well have a positive effect on the fish populations outside the harbors, as many fish species migrate over large areas.

Learn more about the project here.

Stromma and WWF Denmark have installed 20 Biohuts in the Copenhagen Harbour, divided between two locations: Frederiksholm’s Channel by BLOX and just north of the Royal Acting House by Ophelia Square.