The history of the Amsterdam flag Amsterdam’s city flag is super badass. We already knew this, of course. But in 2015 it was confirmed by flag enthusiast Roman Mars (on 10:10) during one of his TED talks.

The flag as we know it today (horizontal red flag, with a black banner and three white crosses) was assigned as the official city flag in February of 1975, but the history dates back to earlier times. Apparently this design was already used in the 17th century, but back then this was an unofficial design.

The three crosses ánd the coat of arms are a much used symbol in Amsterdam. You're able to find them on buildings, bridges, posts and catch them on our 100 Highlights cruise, open boat and pedal boat.

Coat of arms of Amsterdam

The red, white and black flag is an excerpt of the coat of arms of Amsterdam which dates back from approximately 1280.  This sign includes the red and black shield with three white crosses that’s being held by two golden lions. On top of the shield there’s a imperial crown that’s added in 1489 due to help during the Jonker Fransen War.

Underneath all this, there’s a bannister that has the motto “Heldhaftig, Vastberaden, Barmhartig” (Valiant, Steadfast, Compassionate) on it. This motto was added right after the Second World War to remember the role of the citizens of Amsterdam during the war and especially during the February Strike in 1941 – a strike where non-Jewish people protested against the prosecution of Jews. 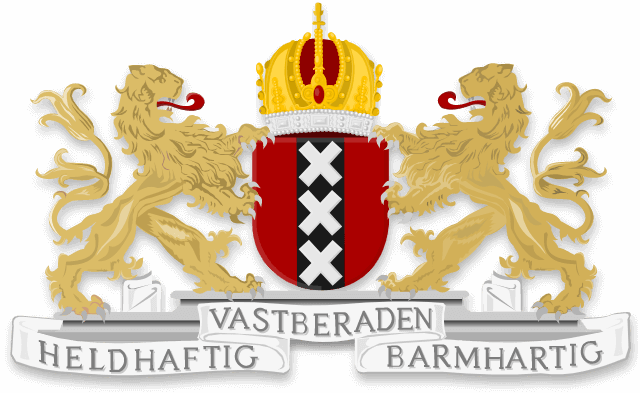 The crosses are called Andreas Crosses, which refers to the apostle Andreas who was said to be crucified at a cross like this. In German culture, the crosses have a protective force.

Many think the crosses are derived from the family crest of family Persijn who is seen as the founder of the current Dam. Other cities that were founded or owned by this family have the same crosses in their coat of arms.

Others think it refers to the three plagues that hit the city of Amsterdam: water, fire and the plague itself.

As you noticed, there’s not just one conclusion about the Amsterdam city flag. Except it being a incredibly cool flag. The flag is still being researched and sometimes little pieces of history are discovered in archives – just like the original flag from the February Strike was found in the city archive a while back. One day this entire story will be pieced together and for now we just have to be really proud to being called the most badass.