Up until the 9th of February 2021 we are closed. Read about our COVID-19 safety measures at our information page.

How to: bike rental in Amsterdam Amsterdam is known for its bikes, whether they’re on or in the canals. Cycling is a easy way to get around town and you can squeeze a little exercise into your holiday or weekend trip. There are a lot of options for renting your bike in Amsterdam and cruising around town like a local.

We’ve narrowed down the list and made a convenient guide on where to rent a bike and how to behave on the cycling lanes without being called names by the vocal locals of our capital.

Where to rent your bike in Amsterdam

There are numerous places to rent your bicycle. We made a selection of a few big players that can be found throughout the entire city. Of course there are more options for your bike, but let’s start with these companies. This company has two locations in the city center. One at Spuistraat, which is close to the shopping area and Central Station and one is located at IJdok at the west side of the city center, next to the IJ river and close to Westerpark.

You’re able to rent your bikes in advance through their website, but of course you can always drop by to see what they have available for you. You can choose from a wide variety of bikes, from a classic city bike to tandems for both adults and kids and everything in between (think cargo bikes and e-bikes for instance). The prices range from €13,- to €32,50 a day, depending on which bike you want to ride. Prices will drop when you decide you want to rent a bicycle for multiple days, so check out your options and needs before you book to make sure you get a great deal!

The red bikes from MacBike are so common, they almost feel like a permanent part of the city. And that’s no wonder, since you’re able to rent out MacBikes at five different locations, scattered all over town. Most of them can be found near the Central Station area and there are two shops located in the south of the city, close to Museum Square, Leidseplein and Vondelpark.

This rental place has a lot of bike options as well. Again, from the regular city bike to tandems, but also cargo bikes, touring bikes, e-bikes and kids seats are rentable. The prices vary from €9,75 to €25 per day, depending on your bicycle of choice. You can easily rent your bikes in advance, but with five locations in the city, there’s always one available for you! 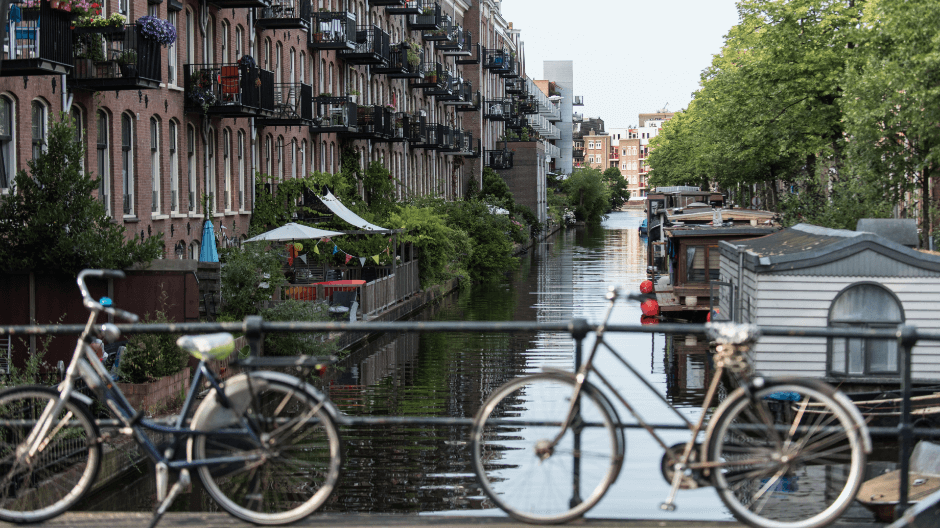 With 13 locations, this is the largest bike rental company in the city which ensures you of a easy bike rental close by. The bikes are – as the name assumes – black and blend right in with the bikes of the locals. Very convenient when you want to experience the city like a true Amsterdammer.

You rent a city bike with foot brakes from €9,- a day and even have the choice to rent a cargo bike in the shape of a clog. Okay, you won’t blend in with the locals when you’re cruising around town in this object, but hey! It is fun and that’s worth something, right?! Reserve your bikes upfront or go to one of the locations in the city. Black Bikes are also available in cities outside of Amsterdam, in case you’re looking for a daytrip outside our capital and want to rent a bike there as well. 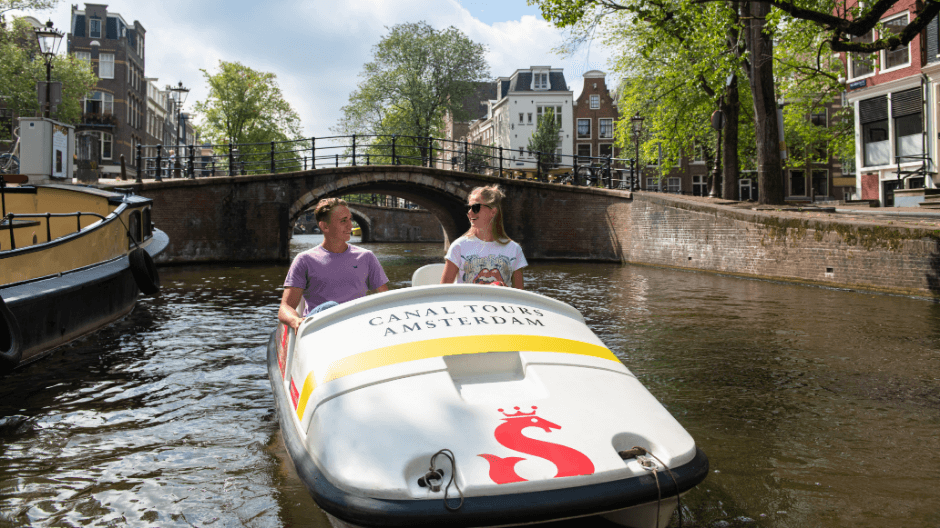 Haaa, okay, we don’t want to leave our pedal boats unmentioned. In Dutch they’re called waterfietsen, which translates to water bikes or the more common canal bikes. You can cycle on the canals and check out the city from a entirely new perspective – from the water! We’ve several places to step aboard these pedal boats and you can rent one for up to four people. An even number of people on the canal bikes is preferred, but whatever floats your boat, of course.

You can rent one for €10,- p.p. at multiple locations in the city center of Amsterdam.

How to ride a bike in Amsterdam

Amsterdam is both famous and notorious for their cyclists. We, Amsterdammers, are driving our bikes skillfully and with a high pace. We don’t mind calling you names if you don’t know how to act on the road (or bicycle lanes), since we’re always in a hurry to get where we’re going – because we don’t leave our house on time ;-)

How do you handle yourself on a bike in the Dutch capital? you ask. Iamsterdam.com (yesss, the same guys as from the I Amsterdam sign) made a fun video that explains how to move around town on a bike with Dutch comedian Maxim Hartman. We really love this video, because it touches the important do’s and don’ts of entering the Amsterdam cycling jungle, but you have to look past the fake accent and the jokes to grasp the essence. We’re sure you’ll get it!

- you’re allowed to cycle on almost every road that’s used by cars (not on sidewalks!)
- look for the red-ish asphalt, tho – this marks the bicycle lanes and are the preferred location for cycling
- we cycle on the right side of the street
- never ride in front of a tram
- watch out for tramrails, cross them carefully to make sure your wheel doesn’t get stuck in the tram rails – you’ll fall flat on your face if you don’t!
- always stop for the pedestrian crossings marked with white stripes
- never stop in the middle of the road
- never stop out of the sudden and without a reason
- use your bell if you want to pass someone
- don’t EVER cycle while being under the influence of drugs or alcohol
- don’t use your mobile phone while cycling
- park your bike in the assigned parking spots – or it’ll be removed by the municipality
- use your hands to show directions – if you want to turn left somewhere, look behind you to see if there’s some who’s passing you, if not, stick out your left arm and turn left. Same goes for going right, of course.

There’s an Instagram account (@tourists_vs_bikes) that’s full of videos of a cyclist in the city center that encounters numerous tourists that are crossing streets, are jay walking or are in any other way not paying attention to the traffic. We know you’re on a bike, but take a look at this account to see why you should ALWAYS pay attention while on a bicycle.