Rijksmuseum in Amsterdam is in the top 3 of most visited museums of the Netherlands and we totally understand why. With it’s magnificent art from the Netherlands and lots of other countries, it’s well worth visiting. That’s why we want to pass on a bit of information about this national treasure of a museum.

The Rijksmuseum is easily visited with our Hop On Hop Off bus and boat. Both vehicles drop you off right at the gate and entrance of the museum.

History of Rijksmuseum in Amsterdam

The Rijksmuseum (translated: National Museum) was founded in 1800 because of the desire to display the collection of Italian art, portrets of the Royal family and Dutch rarities the fled regents left behind in 1795. In 1800 the doors of the museum -  then named National Art Gallery - were opened in The Hague.

A lot of moving

The Hague was considered the capital at the time, since Napoleon’s brother Lodewijk recited the city. He ordered the museum to move to Amsterdam in 1808 and the collection, which then already included Rembrandt’s The Nightwatch, was displayed at the Royal Palace at Damsquare from then on. The collection was moved one more time, to the Trippenhuis in the historic center of Amsterdam, before the collection paintings and other art works were displayed in the Rijksmuseum building we all love and adore right now.

The museum in Amsterdam

Upon the start of the second World War a large selection of art was brought to safety in faults situated in underground passages in Maastricht (in the South of the Netherlands). Of course, the artworks were brought back to Amsterdam after the war ended and it was safe to display the pieces again. 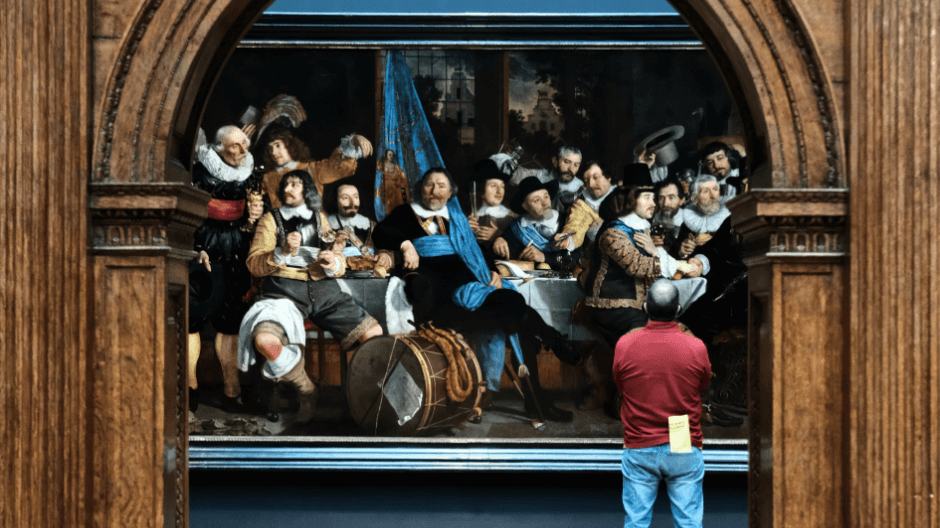 The Rijksmuseum building had some small renovations and additions over time. But due to the different architects and visions on how to display art, the building lost its original charm and feeling. The building also lacked the capacity and modern facilities a highly ranked museum needs to welcome its visitors. That’s why during a restauration that took almost a decade, the building was restored to it’s original style and was reopened in 2013.

The museum displays more than 8000 pieces of art and exhibits the Dutch art of painting from the 1500s to approximately 1900, with a main focus on the 17th Century, also known as the Dutch Golden Age. A few famous Dutch paintings you’re able to gaze at are the famous The Nightwatch by Rembrandt van Rijn, The Milk Maid by Johannes Vermeer and one of Van Goghs selfportraits. Besides these painting, there are replica’s of historical ships on display, for instance. And please, don’t forget to check out the gigantic and enchanting library (that looks like to be straight of a Harry Potter movie).

2019 is celebrated as the Year of Rembrandt and the Golden Age. That’s why the Rijksmuseum took a dive in their archive and resurfaced everything Rijksmuseum had from Rembrandt. This giant collection was shown in the first half of the year. But that’s not the only Rembrandt themed event at Rijksmuseum. The Nightwish is going to be restored and you’re able to witness the restoration research live at the museum from July.

If you just can’t get enough from Rembrandt – and we can imagine you do – we’ve developed an special Rembrandt and the Golden Age tour on our open boats. You're able to discover a tremendous amount of history about this great Dutch painter and his life in Amsterdam. Another plus: you explore the historic city center of the Dutch capital as well!

Tickets for the Rijksmuseum can be purchased at the museum itself, of course. But the queues can be quite long. To save yourself time you’re able to buy your tickets online or at one of our shops as well. You can just skip the line and enjoy all the amazing artworks at the Rijksmuseum Amsterdam.