The best tips for this street culture in the city

The city of Amsterdam is no stranger when it comes to street art, graffiti fixes, murals or other street art works. The city has a reputation that has been embraced more in recent decades than during the early days of this art form. Mainly, because the reputation of street artist is no longer that of a rebel, an activist, squatter or punk, but they are seen as artists with an original message which can make you think. Besides, it has acquired an accessible character because many people come in touch with art this way.

Looking for street art in Amsterdam? This is the place to be

It has found and earned its place in the street scene, creating a free and lively subculture with many artworks. As the temperature rises in the summer months, it's a great opportunity for a bike ride, a walk or a boat trip in search of these unique works of art in public places in Amsterdam, or to visit some of the city's wonderful museums. Dive with us into the world of street art in our capital. We've listed the most interesting and beautiful spots

You don't have to go far back in time to the origin of this art form. It started in the early 1970s in Philadelphia and New York. Initially, it was mainly about tagging and name tags. It is the signature of a graffiti writer that he puts on walls, because the street and its walls are used as his canvas. In the 1980s, this art form evolved into Street Art, with more drawings and the artist wanting to create something with a social, political or humorous message. 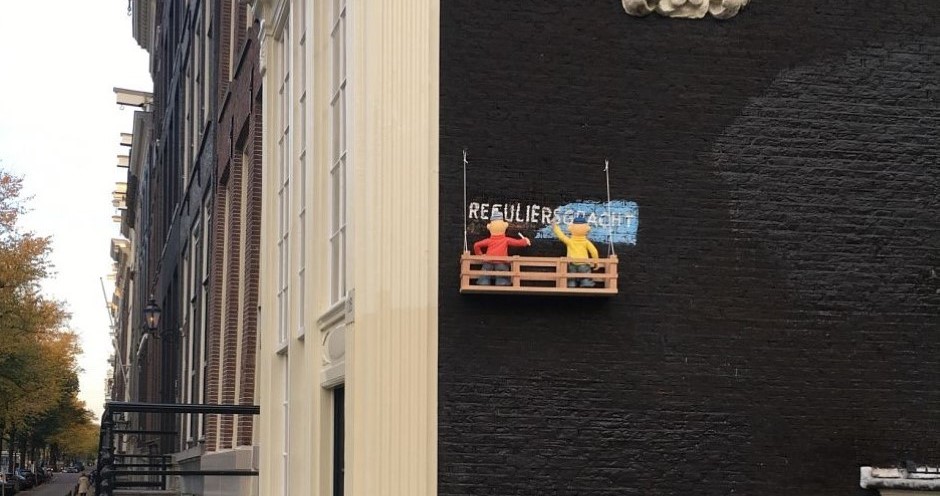 Where it all began in Amsterdam

Our capital city is also an early adopter: around 1975, the first graffiti messages are visible on various walls in Amsterdam. These were usually activist slogans, but were soon followed by name tags from the likes of Dr Rat and Vendex, both from the squatting and punk movement and pioneers in Dutch graffiti history. In the decades that followed this form of art developed into a much-loved guest in the street scene. More and more initiatives focused on street art have been launched in the last twenty years, which have embraced this populair phenomenon. This is a positive development, as it gives the city a diverse, cultural, creative, open-minded and social flavour

Searching for artworks in Amsterdam is a fun aspect of this whole subculture, but if you don't feel like it, check out Street Art Cities, where Amsterdam has recently been added. The website shows current works of art, even those that are extremely hidden.

Perhaps the best known place in Amsterdam when it comes to murals and graffiti is on the other side of the IJ. In the vibrant and fast-growing Amsterdam-Noord. Take the ferry behind Central Station towards the NDSM wharf, a place that has been transformed into a cultural breeding ground with studios, restaurants and a street art museum. Here you can take a guided tour through a former shipyard where the STRAAT museum is located or just wander around on your own. The museum focuses entirely on graffiti and street art. If you don't want to visit the museum, take a stroll through this area where there are plenty of impressive murals to be seen, such as the one of Anne Frank, created by the Brazilian Eduardo Kobra.

Amsterdam Centre is for many people an open air museum, therefore also a popular spot for Street art artists. An great combination. People with an excellent eye for detail or a sense for street art have undoubtedly seen his works in the city centre. Street art Frankey, Frank de Ruwe, is a Dutch artist who with his works mainly wants to radiate fun, make people laugh. He lives in Amsterdam, so this is also his playground. It has often happened that his works of art become part of a neighbourhood and that the residents don't want to be without them anymore. Frank shares many of his works on Instagram and you are free to share the images. 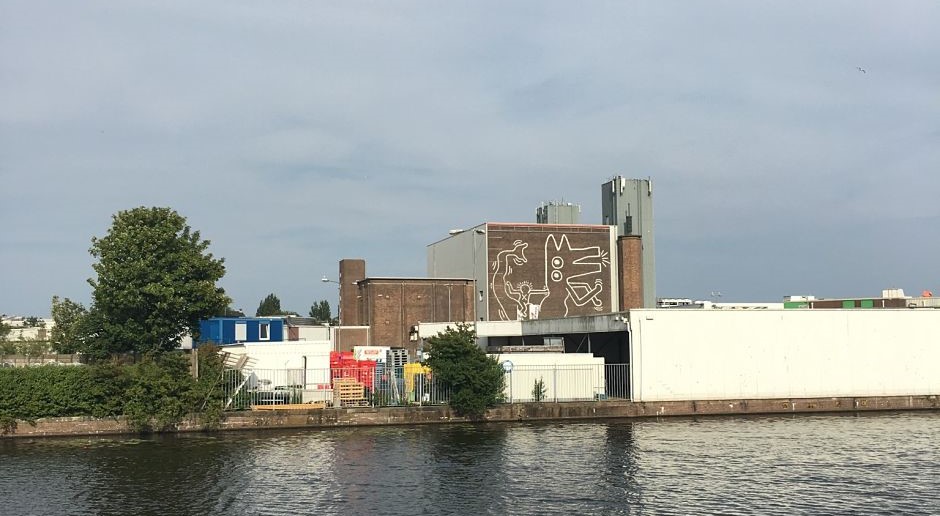 One of the most famous pieces in the city is that of the world-famous American artist Keith Haring. In 1986, he unfortunately died four years later of AIDS, he placed a twelve-meter high artwork on a wall of the Foodcenter in Amsterdam-West. At the same time, the artist was working on an exhibition in the Stedelijk Museum that year. It was his first solo exhibition in the world.

The mural in the Baarsjes was rediscovered only a few years ago, in 2018. Since then, a plan has been made to restore the work, because that was necessary. The initiative was set up by Dutch graffiti artist Mick La Rock who, in collaboration with, once again, the Stedelijk Museum, created a plan to restore the famous street-art mural. Due to COVID, the restoration work was partially postponed and the plan was delayed, but all the fans of this modern art form can be relieved because the restoration project is still alive and kicking. 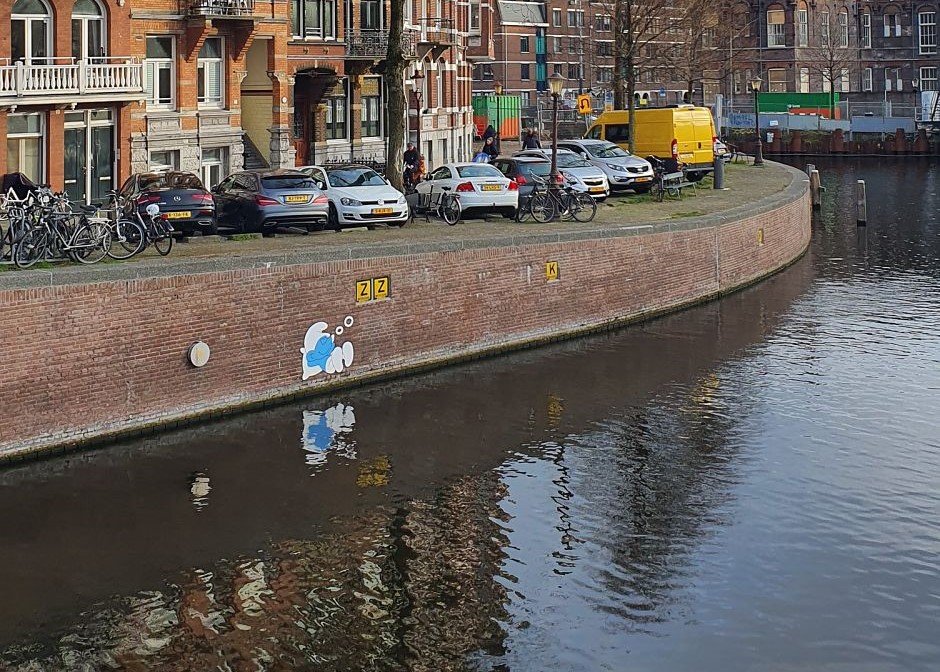 Street art from the water

In and around the ring of canals, many works of art are visible from the water, such as the sleeping smurf by Street Art Frankey. There are more places that are embellished with small subtle artworks or graffiti texts around the canals of Amsterdam. So take a Pedal Boat or go exploring during an Open Boat Tour.