Up until the 1st of April 2021 we are closed. Read about our COVID-19 safety measures at our information page. What is the story behind the two Amsterdam houses around which the Victoria Hotel is built? Today it is one of our stores (referred to as Flag Store), but the two buildings have quite an eventful history. It was interesting enough to dedicate an entire novel and movie - Publieke Werken – (translated as Public Works) to it. Let’s read about the two buildings that interrupt the facade of the luxurious hotel on the Prins Hendrikkade.

The two houses in the Victoria Hotel

If you have ever visited Amsterdam, you probably remember the monumental building on the corner of Damrak and Prins Hendrikkade. Weren’t you paying attention because you were deciding where to go shopping or how to best get to the museums? We would like to refresh your memory: that is the Victoria Hotel right across Amsterdam Central Station. You can already see the hotel when you get out of the main entrance of the train station.

Did you know that there is a special story behind the construction of the Victoria Hotel? You may have noticed that two houses (on Prins Hendrikkade 46-47) interrupt the facade of the hotel - if not: try to discover them on your next visit! 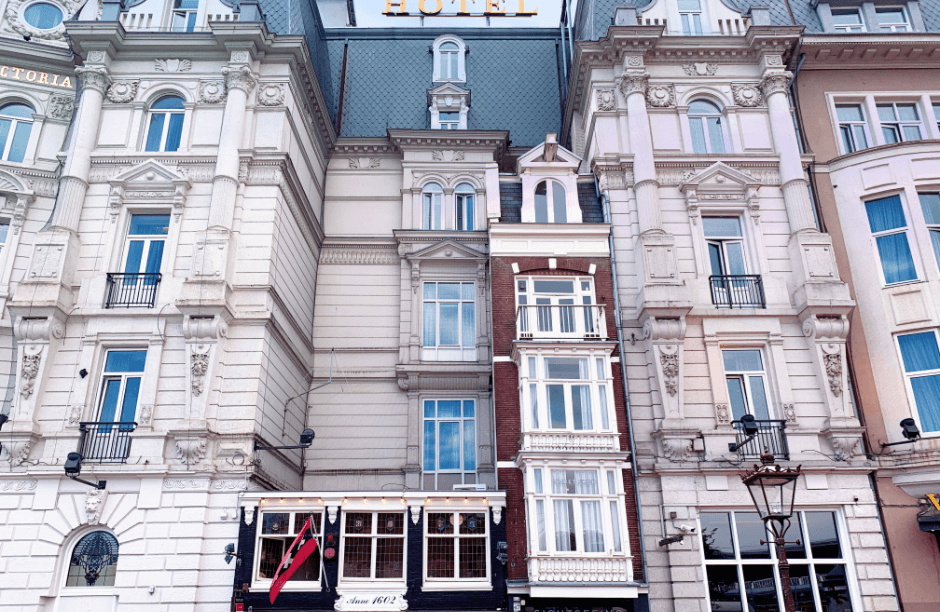 In the second half of the 19th century, a number of luxurious hotels were built in Amsterdam to give the city more allure. The Americain Hotel on Leidseplein was one of those hotels, just like the Amstel Hotel at… (you guessed it) the Amstel. Because Amsterdam Central Station was to be opened at the end of 1889, it made sense that a luxury hotel was also opened on that side (opposite the station) of town.

The German architect Johann Friedrich Henkenhaf was commissioned to do so, having previously also designed the Kurhaus in Scheveningen. Henkenhaf was therefore no unknown player in the field of hotel construction.

There was only one problem: the location that was chosen for the hotel, was still a street with houses - back then the Texelse Kade. One by one, the homeowners were bought out and sought refuge elsewhere. But two homeowners persisted and did not want to be swayed with money. At number 46 lived tailor Carstens and at number 47 bar owner Verburgt.

As in the book

In the book Public Works, the story has been romanticized and homeowners persisted in hoping that a higher bid would follow. However, the high offer - a proposed 50,000 guilders (then an astronomical amount) - failed to materialize and the two homeowners were left empty handed.

No one really knows why the homeowners did not accept the hotel builder's offer (46,000 guilders, wow!). What we do know is that Henkenhaf had enough of the persistence of the home owners. It just simply took too long. That’s why he decided to build the hotel around the houses. Hence the unusual shape of  Victoria Hotel and the two buildings were being encapsulated in the facade.

The film and the book

In 1999 Thomas Rosenboom wrote the book Public Works that won several prizes in 2000 and in 2015 the book was made into a film under the same name. In 2020 you can watch it on Netflix - highly recommended because in addition to the above facts, the story has been supplemented with an exciting and gripping storyline. Perfect for a day on which you cannot enter the city, but would like to experience it anyways!

Then book a cruise on an open boat, for example. The skipper guides you throughout the city and tells one special story after another. Every skipper is an expert about the city of Amsterdam, so you can be sure to disembark full of information and beautiful anecdotes. There is no nicer outing to see the sights of the city.

* images are from the city archive of Amsterdam

Where do I find these two houses?