Helsinki City Highlights – what to discover along the route

The best of Helsinki shorelines

Did you know that Helsinki has more than 130 kilometres of shoreline? A wide variety of landscapes invites you to explore every corner, and you could actually walk the whole shoreline from east to west. But why walk when you can cruise in the Helsinki archipelago and see it from the sea.

Stromma's Helsinki City Highlights route takes you along the shores and beaches of southern and eastern Helsinki. During the archipelago cruise, you will see the most beautiful sights, new and old residential areas, as well as terraces, carpeted jetties and small harbours. In this blog post we have listed the best spots along the route.

Beautiful Kaivopuisto and a touch of luxury

The cruise starts from Helsinki's market square and heads to the south. On the left, you can see the small island of Klippan with a lovely white wooden villa that has housed a restaurant since 1899. After passing the Olympic Terminal, the boat sails towards the Eteläranta and Kaivopuisto Park. Here you can see a glimpse of the wonderful houses and manors and watch cyclists, roller skaters, scooters and joggers swish by.

Kaivopuisto is an impressive sight. It is the most famous and oldest park area in Helsinki and still popular among the residents. It is surrounded by magnificent Art Nouveau houses as well as lovely cafés and terraces, such as the Café Ursula operating since the 1950s, the trendy Mattolaituri and hugely popular Café Carusel. On the left side of the boat, you can see the small Uunisaari island, which used to house a city spa in the early 19th century, and the Harakka Island. On the small Sirpalesaari island, there is Restaurant Saari, a popular sailing marina.

After the southern shores, the Helsinki City Highlights route continues towards the historic Suomenlinna and Vallisaari. Suomenlinna is a UNESCO World Heritage Site, a historical fortress island, Finland's most popular attraction and a residential area for about 800 people.

Vallisaari island, on the other hand, is a former military area that opened to the public in 2016. The island has wonderful nature, fortress ruins and this summer also Helsinki Biennale, so definitely one of the must-see places to visit this summer. 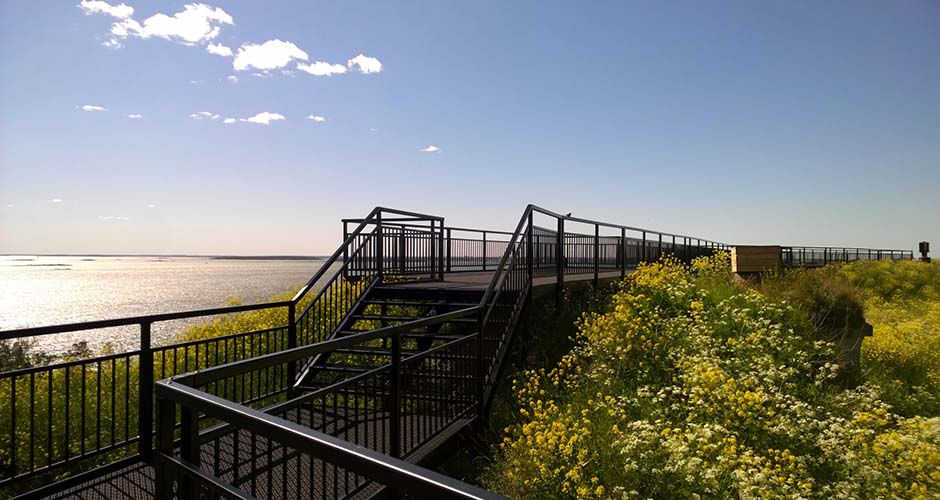 Rocky shores of the eastern part of Helsinki

The shores of Kruunuvuori and Laajasalo are undergoing massive changes, at least until 2030, when the bridge from Laajasalo is to run directly to the city centre. In the future, the Kruunuvuori shore will be a district of light where the area's lighting and light art works illuminate the dark seasons.

Can you spot a huge white round building on the shore? It is a former oil tank and the current light and landscape artwork Oil Tank 468. The tank can be visited in the autumn on certain weekends, and it can also be rented for events. 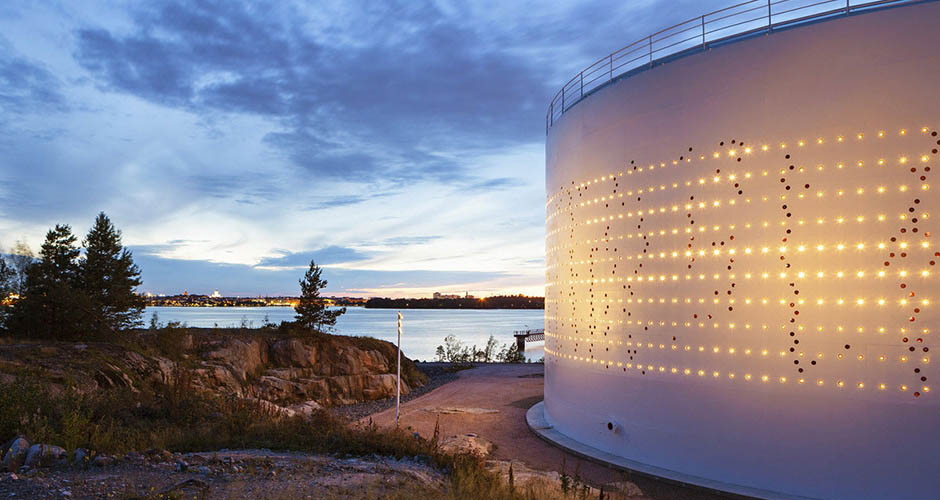 Next to these new urban districts, a yellow villa peeks out in the middle of the trees, with a terrace full of people on beautiful summer evenings. This is the Pyysaari restaurant, Palma de Pyy. The restaurant operations at the villa began already during the Helsinki Olympics in 1952 when preparations were made to take care of the participants of the sailing competition.

During the Helsinki City Highlights route, you can really see the different, even opposite sides of Helsinki. First, you'll see the old Kulosaari, with its magnificent beach houses, embassies of different countries, sailboats and the beautiful Kulosaaren Casino, and suddenly the scenery changes and you can see the skyscrapers and the orange metro train running further away. This is the new Kalasatama district, already home to more than 5,000 people. 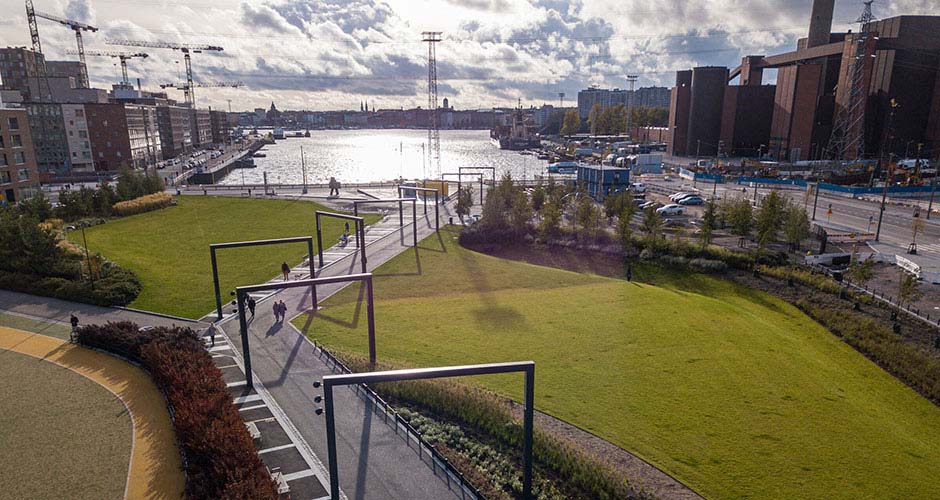 And just next to it the most-loved recreational island of the city, Mustikkamaa. It has woods, walking trails, a beach to take a dip in the sea, and many idyllic rocky beaches where you can bask in the sun. Mustikkamaa and Kalasatama are connected by a white Isoisänsilta bridge, named after the fisherman Viktor Wilhelm Wickman, who lived in Mustikkamaa. From Mustikkamaa, a bridge also runs to Finland's oldest zoo Korkeasaari.

The last part of the Helsinki City Highlights route runs along the shores of Katajanokka. The most prominent feature is the magnificent golden-domed Uspenski Cathedral, the largest Orthodox church in northern and western Europe. In addition, there are wooden sailboats with summer restaurants anchored at the Halkolaituri pier. The red brick warehouse buildings of Katajanokanranta are now a popular restaurant hub where you can eat, drink, have a coffee or a dinner, and sing karaoke.

Next, the boat passes the guest marina, Katajanokan Casino and finally one of Helsinki's landmarks, the icebreakers. The six icebreakers are called Voima, Sisu, Urho, Kontio, Otso and Polaris. 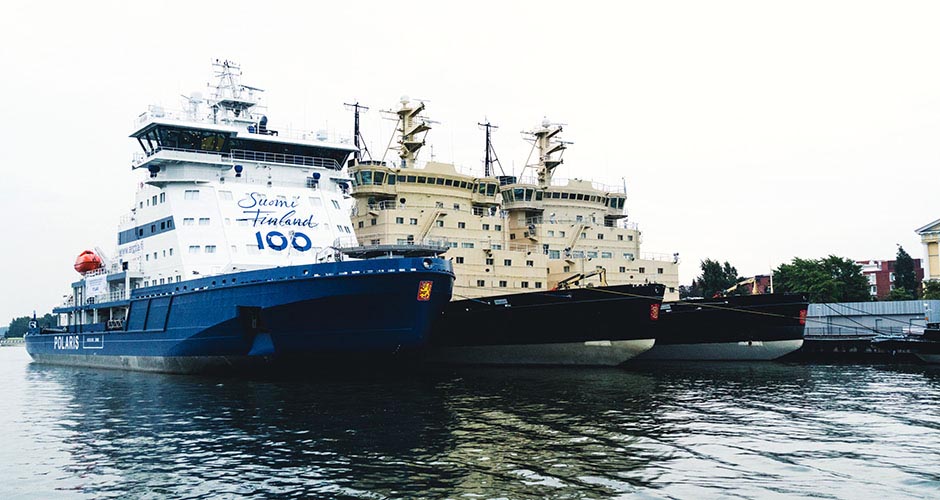 After the newer side of the Katajanokka district, the boat heads towards the pier at the Market Square and, last but not least, pass the outdoor swimming pool Allas Sea Pool and the majestical SkyWheel Helsinki. Helsinki is a wonderful summer city; you can't argue with that!

Tip: Pizza Dinner at the sea!

You liked the Helsinki City Highlights route but would have wanted to have some dinner? No worries, book a ticket to the Pizza Cruise, where the ship takes almost the same route but stops at the small Katajanokanluoto islet to pick up freshly baked pizzas!

Stromma bus sightseeing tours Helsinki Panorama Sightseeing and Hop on - Hop Off Helsinki start in August 2021 and also run along the shores of Kaivopuisto. 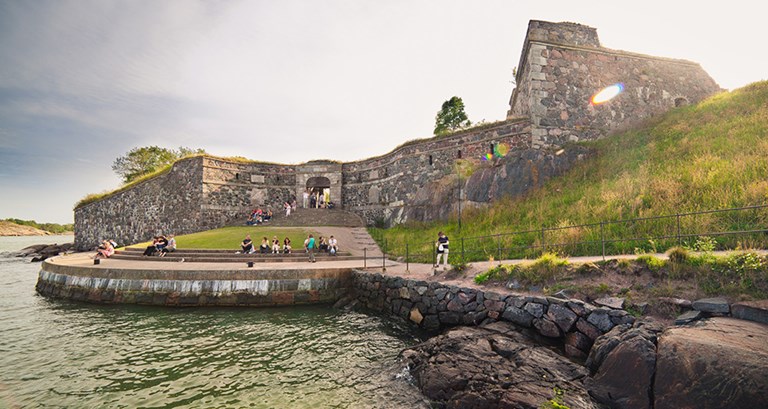 Both islands, Suomenlinna and Vallisaari, can be reached by boat from the Market Square. The Suomenlinna ferry is part of Helsinki's public transport, so the boat ride by the ferry is free for Helsinki Card holders.