Outdoor activities and festivals in August

The best places to be in Amsterdam in August

The sun and rain are already alternating considerably in the summer of 2021. Although the rain sometimes pours down, we are really in the middle of summer. Normally the ideal time for an outdoor activity, and there are plenty of those in Amsterdam. We'll tell you which festivals and outdoor activities you can visit in Amsterdam in the second part of August. Luckily some are at covered venues, so a rainstorm won't spoil the fun. These are our best tips!

Classical music throughout the city: Grachtenfestival

Every year in August, the Grachtenfestival takes place at various locations around the city. Young talented musicians surprise you with their own musical story. A summer festival full of classical music, jazz and music from other cultures. Musicians from all over the world gather in the capital for the 24th edition of this ten-day music spectacle.

As a music lover you'd better take these days off because with over 200 concerts your agenda will be filled quickly. A jam-packed program that this year even extends beyond the 90 locations in Amsterdam. The classical musical sounds can also be heard in Zaandam, Almere, Lelystad and Amstelveen. New this year: storytelling concerts, in which the musicians tell the stories behind the process of making the music. For more information and tickets check Grachtenfestival.nl.

Another classical highlight in August is the Prinsengracht Concert, organized by The Pulitzer Hotel and the AVRO/TROS. This year it will take place on Saturday 21 August on the Prinsengracht near the Rozengracht. 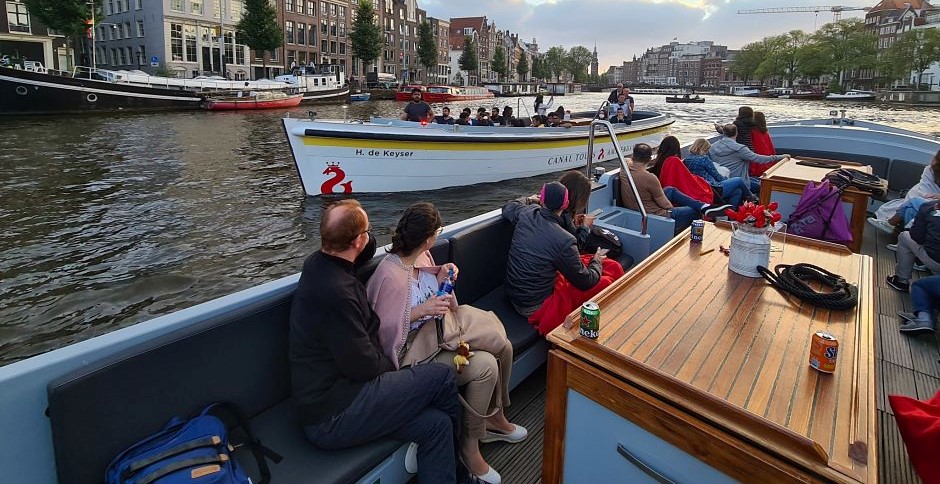 Experience Amsterdam from the water

The best view of the city is from a boat or sloop. Okay, we may be biased but come up with a good counter-argument. In the summer months, nothing beats the sound of rippling water and, with a little luck, the summer sun on your skin. The view is not only stunning it can also be educational. Learn all about the city's history, attractions and secrets on an Open Boat Tours or Amsterdam Canal Cruise. The traditional Canal Cruise has the added benefit of being able to easily weather a rainstorm.

Boarding is possible at various locations in the city such as the Rijksmuseum, the Leidseplein and the Damrak. Sit back and relax and leave the sailing to the skipper who can also tell you some interesting stories about Amsterdam's many treasures.

Check out a film at Pluk de Nacht

Book a beach chair on the waterfront overlooking the IJ while a film by an arrived or talented filmmaker plays out on a mega large screen. All sorts of things will pass by. National and international feature films, documentaries, short films and animations. By now the program is known, the films have been selected so you can choose your evening film at plukdenacht.nl. The location is, as every year in Amsterdam, the Stenen hoofd, not far from Central Station.

The open-air cinema is basically free but you can reserve your spot online with a donation by booking a beach chair. This is highly recommended because it often fills up quickly. If you can't make it in Amsterdam, you'll get another chance in Utrecht in September. The annual open-air film festival is held from 25 August to 04 September in Amsterdam and from 8 till 12 September in Utrecht.

Music in the open air

As mentioned, the Grachtenfestival is in August but it is of course possible that your musical preference does not lie directly with classical music. No problem, there's plenty of other music to listen to outdoors. Take the forest theater in het Amsterdamse Bos where the series Live at Amsterdamse Bos takes place again this year. Renowned artists perform in the charming arena in the middle of the woods, between the Ringvaart and Amstelveen. This year with many home-grown artists. Because of corona, a number of concerts have been moved to take place in August and September. A selection of the artists: Ilse de Lange, Rowwen Heze, but also for example the Nederlands Kamerorkest, a famous Dutch orchestra.

The bostheater not only hosts concerts but also theater and plays. For the full schedule check bostheater.nl. For the concerts check liveatamsterdamsebos.nl.

A very special theater is located in the middle of Vondelpark. A theater that is largely kept alive by the efforts of countless volunteers, and is accessible free of charge. Without the volunteers, the Vondelpark Open Air Theater could not exist. Every summer the theater is used for performances and concerts. The programming is very varied. From youth theater and cabaret to musical performances. And don't think that the quality of the performances leaves much to be desired because it is free. Far from it, there are often well-known artists on the characteristic stage that for many Amsterdammers is a must go every summer.

Starting this year, your support for this special initiative is more important than ever. The city council has decided that they will no longer subsidize this creative place so they are now dependent on donations. Places like this make the city, so together we have to keep these places alive. Go to the Openluchttheater.nl and become a friend of this beautiful place by making a donation.

Find coolness at these swimming spots

Finally, not a festival but definitely an outdoor activity. For convenience, we will assume that August also provides the necessary warm days. The best way to cool off is to take a dip in an outdoor pool or in open water. Amsterdam has a good number of official swimming spots where you can go for some much-needed refreshment. Such as the Marineterrein, the Gaasperplas, Strand IJburg or in Amsterdam North at De Ceuvel. Have fun.