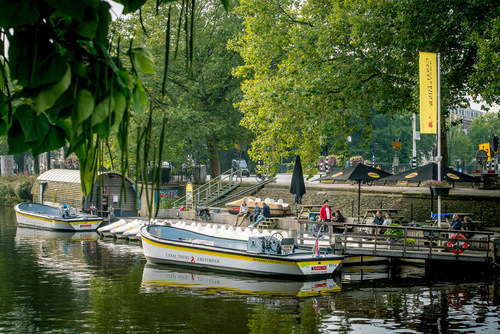 Click on the map or the links for more information about the various locations along the route. The Rijksmuseum is one of the largest museums in Amsterdam. Built in 1876 to the design of architect P.J.H. Cuypers, and opened in 1885. Here you can marvel at the world-famous Night Watch by Rembrandt, the iconic paintings by Johannes Vermeer and Frans Hals and other Dutch masters.

Orange 2 & Purple 7: Weteringwaterkeringsluisje
This little lock from 1657 is part of Amsterdam's impressive water control system. The locks are still sometimes used although they are fairly useless nowadays, only at high tide this lock is closed The Spiegelgracht, located opposite the Rijksmuseum, together with the adjacent Nieuwe Spiegelstraat, forms the heart of the Spiegelkwartier, an area with many antique stores and galleries. The canal was dug in 1663 as part of phase 2 of the ring of canals.

Orange 4: Deutzenhofje
Hofjes were founded by wealthy citizens for the elderly. The Deutzenhofje at numbers 857-859 is one of the largest in Amsterdam. Agneta Deutz detested her son's behavior and decided to disinherit him. The hofje was founded in 1692 from her estate.

Orange 5: Stork
Do you see the stork above the door of one of the buildings (on the corner)? Indeed, a midwife used to live here The large wooden square building on the Reguliersgracht was an emergency church. It was erected in 1670 in anticipation of building blocks. In Napoleon's time the building served as a horse stable. Across the Reguliersgracht 7 identical bridges were built in a straight line. In 1901 they wanted to fill up the canal, but thanks to a protest group this beautiful vista was preserved. Perfect for a photo!

Orange 8: Arion
Keizersgracht nr. 615 has a beautiful neck gable, with the Greek Arion on it. He was famous for playing the lyre. Once he was in danger of drowning and was saved by a dolphin, lured by his beautiful music.

Orange 9 & Purple 5: Leidsestraat
The Leidsestraat is a busy shopping street and is the second most expensive street in Monopoly. Only the Kalverstraat is more expensive.

Orange 10 & Purple 4: Facades Leidsegracht
At Leidsgracht nrs 72-78 you can see the different types of facades next to each other: a neck gable, a frame gable, a warehouse with spout gable and a stepped gable.

Scroll down for a photo of all facades. Here you cruise past the back of pop temple Paradiso, housed in a former church. This concert hall is famous for its special atmosphere and acoustics. World stars such as The Rolling Stones, Prince and Nirvana once performed here. In addition to concerts, dance parties and other events are held here. You are now near the entrance to the largest city park in Amsterdam: the Vondelpark. It was laid out in 1865 by garden architect L.D. Zocher. In addition to lots of public greenery, there are also nice restaurants, an outdoor theater and playgrounds to be found. With a length of 3.3 km. the park offers all the place for residents and tourists to relax.

5 types of gables in Amsterdam Living in the Canal belt The Herengracht was for the richest (merchants/regents of e.g. VOC/WIC), a circle lower Keizersgracht for the middle class like bankers and Prinsengracht for lower merchants and warehouses/industry and then the Jordaan for the poorest (immigrants and workers). Next to Central Station is the most famous bicycle shed in the city. It can hold as many as 2500 bicycles.

Bikes in the canals

Annually, an average of 15,000 bicycles end up in the canals, of which the municipality manages to fish out less than a third. The Red Light District is the most famous red light district in the world.

The history of the area dates back to the 14th century. Back then, Amsterdam was one of Europe’s most important trade centers. The harbor was very close, there were many sailors – these are the main reasons why prostitution actually started. Amsterdam quickly became a magnet for the oldest profession in the world

Currently there are just under 300 windows left and a number of brothels, sex stores and sex theaters. There are also many cafes and bars in the area, and of course coffee shops.

Prostitution is legal and brothels are regulated. Police walk around regularly for safety, and many streets have security cameras, making this one of the safest neighborhoods in Amsterdam.

Besides all the entertainment, it is also a neighborhood where many people live, study and work.

Most of the lights you will encounter are red, however, you will also find a blue light here and there. Under these lights are transgenders.

Back to the top