This summer’s book and travel tips – the best archipelago whodunnits

Books to inspire your archipelago daytrips in Stockholm & Gothenburg

Summer is the perfect time to read a good book – in a hammock, on the beach or even indoors snuggled up in your favourite armchair on a rainy day. Thrillers and detective stories are very popular and Sweden is lucky enough to have many talented crime writers. Here we list some of the best writers and books offering crimes and mysteries, set in beautiful archipelago settings in Stockholm and Göteborg. Maybe you’ll want to discover these places yourself after reading about them or you’ve decided to visit e.g. Marstrand, Sandhamn, Finnhamn or Vaxholm, and would like to take along a book set in that location. Here we list the best books and give you tips on how to get to the locations – if you dare!

Viveca Sten’s popular ‘Sandhamn Murders’ books are set in the summertime in the Stockholm Archipelago – a time when this summer paradise is at its loveliest. Since she was a child, Viveca has spent many summers here, so she knows her island inside out! In her books, there’s a stark contrast between the beautiful and idyllic setting and the dark stories that unfold. At the core of each book is a question about what drives a person to commit the most taboo act – murder. In the books, we get to know Detective Inspector Thomas Andreasson and his childhood friend prosecutor Nora Linde – their personal lives and their hunt for the bad guys. Expect nail-biting excitement!

If you’d like to see and experience the locations described in Viveca’s books, you can enjoy a lovely boat journey to the popular archipelago island. The fastest way to travel is with our modern Cinderella boats and the most scenic way to travel is via Strömma Kanal (the waterway) on the M/S Strömma Kanal, which has been specially built to navigate the shallow, narrow and stunningly beautiful canal! As an added bonus, this is a guided journey. There’s a KRAV-labelled restaurant & café on board all our boats.

The Vaxholm Murders series introduces us to journalist and archipelago newspaper editor Angelica Moe and her friends in the police force. We uncover a new side of the Stockholm Archipelago – a far cry from the traditional idyllic haven. We get to know Vaxholm, as well as nearby islands and small communities – in Bogesund a young PhD student is found murdered in a crofters cottage; a respected surgeon gets murdered on Resarö, and a woman is found brutally murdered among the rocks out at Finnhamn. It all starts when Angelica Moe takes over a newspaper and stumbles over events with dangerous consequences. Ferociously entertaining!

If you’d like to explore in and around Vaxholm, you have several options by boat: you can either take one of our modern Cinderella boats, or enjoy a guided boat tour on the M/S Östanå I or the S/S Stockholm. Take the Cinderella boats if you want to explore the cliffs at Finnhamn.

Mikaela Lodén is an author who lives in Vaxholm. She also works as a guide at Bogesund Castle near Vaxholm. She’s told countless stories there about the Grim Reaper, who actually terrorised Vaxholm in real life. These stories inspired her to write ‘The Baron’s Bequest’. Her book begins with a man in a dark cloak threatening a woman he meets one evening on the desolate Bogesundslandet peninsular. There are rumours that it might be the ghost of Baron von Hök, who committed suicide at the end of the 1800s. Or could there be a madman on the loose? The plot thickens when a dead man is discovered in the forest and someone catches a glimpse of a black cloak through the trees... Warning – you won’t be able to put this book down!

If you’re still brave enough to visit Vaxholm after reading this book, you have a choice of several lovely boat tours: our modern jetboats the M/S Cinderella I or M/S Cinderella II, or the classic archipelago boats the M/S Östanå I or the S/S Stockholm, which have the added bonus of an on-board guide.

If the longing you feel for Sweden’s West Coast is overwhelming, may we suggest Ann Rosman’s books, which are set mainly in the sailing town and seaside resort of Marstrand. At the centre of the island looms Carlsten Fortress, a reminder of of the island’s long and often grim history, which gives the island an air of mysticism. We read about historical events, such as the visit of King Oscar to Marstrands Turisthotell in 1906, the fire that destroyed several parts of Marstrand in 1867, or the fate of Metta Fock, who was accused of poisoning her husband and two children in 1806 and became the only woman prisoner to ever be held in Carlsten Fortress. These historical events are interwoven with modern-day crimes, with a great sense of atmosphere and drama. The main characters in these books are Detective Inspector Karin Adler and her colleagues. Incredibly exciting and intelligently plotted stories!

The archipelago boat the M/S Göteborg is a convenient way for you to get to Marstrand. On this guided daytrip, you also stop on the beautiful island of Källö-Knippla on your way to Marstrand. 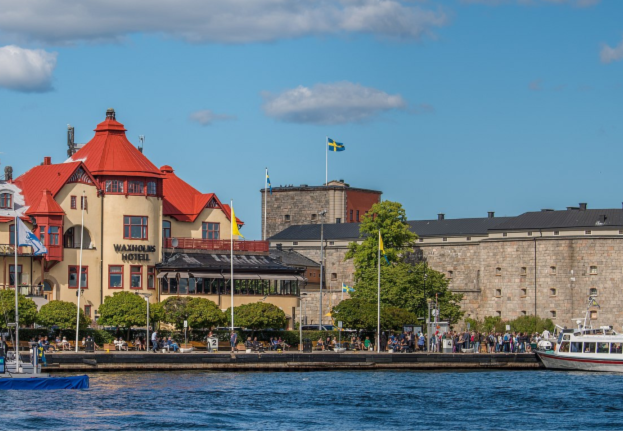 Find your boat trip to Vaxholm from Stockholm 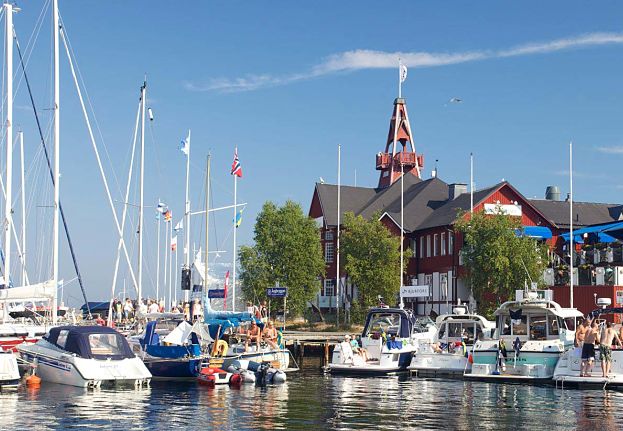 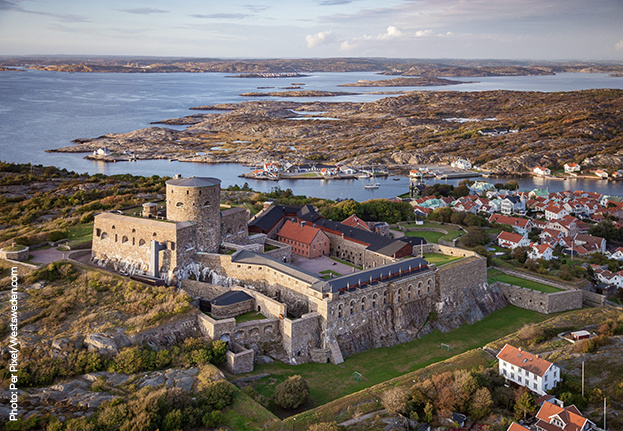